This topic has been deleted. Only users with topic management privileges can see it.
last edited by
0
J
Justn

Some of you remember this engine very well and some newer or recently returning members of the community may not. This was the version or Eclipse Origins 2.0 that was developed by Sekaru and features a lot of optimizations, rewrites, and bug fixes from him and some others from the community. Sekaru had prided himself on keeping the engine clean and optimized for the best performance possible. With his blessing and the fact some people like me still use vb6 for hobby game-making he has given us permission to release the engine here again. This engine has everything you need to start making a decent game. This is probably the last version for new features as this is intended to be a stable base. I am sure Sekaru, the community or myself can help with any bugs that may come up. Hopefully this engine will be of use to someone and hopefully will still have a home here

EVB features a rich and dynamic quest system - customisable to fit your needs!

Thanks again for everyone who had a part in making this engine and Sekaru for releasing it again.

Glad to see this here!

i am glad it is back 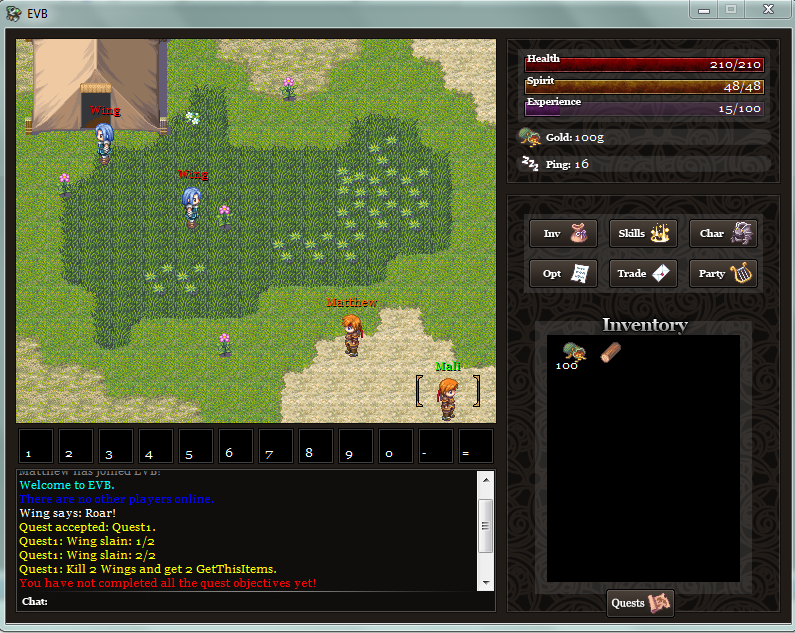 you didn’t get 2 of the item from what i see. lolgeteverythingthenyoucancompleteit

It doesn’t even work when I tone it down to one.

EDIT: Hm. Surprisingly, no check is made to see if the player has the item in their inventory when the player does an action to advance to the next stage of the quest. While I understand why the quest is updated whenever the player does every other little action, it’s not something I would do.

Also, I took a look at the quest editor, and was rather disappointed. Back when I was working on this with Sekaru, I used a layout similar to the one in the conversation editor for the quest editor so that increasing the maximum number of tasks a player had to achieve in a quest would be easy. The method used now would only make the UI look clunky if anyone wanted to increase this amount.

lol it is just how it was typed in the item editor.

ohh ok i see what you are saying now. Let me look into it cause It was working on the last version I think he just left something out. Also a scroll bar for quest objectives would be a lot better lets see what we can cook up Ill try to do it.

Could you put this on Github, please?