Life forge is an ORPG designed to be what you make of it. The story is simple, you are found unconscious along a shore line by an elderly man who leads you to his home for shelter. There, the player soon realizes they have no memories, of course and the world in Life Forge is all new to them. From here, the players life is whatever they make it. A Life Forge, if you will.

In the world of Life Forge there is lots to do and be a part of. Players can become great and powerful heroes or, if they wish, villains and take part in quests, explore dungeons and have PvP battles in arenas. If a player decides they don’t want to run around and take part in adventurous deeds then they won’t have to. In Life Forge crafting is available as well, so If a player wishes then they can harvest all sorts of goods to create a variety of items. All of which they can either use for themselves or sell to other players. Guild and Player housing are also planned features for the game, giving players another little slice of variety and choices which will make their game play unique.

Use mounts to travel faster! Different mounts will travel at different speeds and there will be several to choose from. Choose your characters gender and their hair style. We plan to add new races as well.

When your character dies, you will have 60 seconds to either wait and be revived by another player or respawn back at your last check point.

*Note: You can press “V” to respawn anytime within that 60 seconds. Items have weight and your character has stamina. The more weight you’re carrying the less stamina you will have which will cause your character to move slower. Stamina can be raised through strength and endurance. Each boss is created to be unique for a more enjoyable boss battle. Custom programming for each boss is put into the game, so expect a challenge!

Your character will gain threat when in battle! Be prepared, enemies will attack the fighter with the most threat first. And, there are taunt skills to increase your threat even more, for those who feel bold anyways. Keep track of your quest progress and pin the ones most important! By clicking on the quest while in to quest log, the quest(s) will pinned to the game screen for easy tracking! There are three different skill trees to apply talent points too, giving players the chance to make their character a unique and fun experience.

And of course we have all the basic needs of an ORPG…
Guilds
Dungeons
Projectile Weapons
Blinding Spells
Invisibility Spells
Crafting
Spell Casting and Projectile Enemies
Paperdolled Items
Zelda-Like Puzzle Systems
Many other fun features!

If you want to keep a close eye on this project and be around for Open Tests and the like, we’re over at www.LifeForgeRPG.com

What Art Style would one Consider this? Just Curious

Zetasis is going for a more modern take on old school Zelda graphics. I absolutely love his art style and it looks wonderful when it’s all in-game together

~Pre-Alpha Changes~
As some of you know, our Pre-Alpha wasn’t perfect, as is the point of something like a Pre-Alpha. We Changed and fixed quite a bit since the closing of Pre-Alpha.

-Death System-
We know that some of you hated our Death System. As such, we’re making some much needed changes. Now, upon death, you have 60 seconds to be resurrected, else you will be auto-respawned at your character’s checkpoint. What we changed, however, is now you can respawn at any time during that 60 seconds by pressing the “V” key. A little prompt will come up as soon as you’ve been rekt by some Fungoids.

-Bug Fixes-
A big thanks again to all those who found bugs for us to fix! At this point we’ve fixed all bugs found during Pre-Alpha! This is great, because it means a more wholesome and fun experience for you all when we launch our Open Alpha!

-Gems-
Some of you noticed that there were 4 un-used equipment slots during Pre-Alpha. One of those was Gems!  Gems are key items for your character’s build later during the game. Depending on the Gem Type and Color, you get a new Element applied to your character. Depending on your element and the element of your target, you could be dealing some massive damage!… or maybe face a little resistance. We hope to see this play a key role in PvP!

~Buffs/Debuffs~
Yep, they’re done! Also, with some code by Benjo, we have our buffs and debuffs display in a nice little format to the right of your screen! This can display a ton of buffs if need be! It shows the buff/debuff’s name, icon, time remaining, and stat change!

~Backstab Spells~
We found that one of the biggest problems with previous games was the lack of balance in PvP. To us it just seemed as though ranged based characters were strictly better in PvP due to being able to kite from a safe distance. With our new spell type, Backstab, however, we now have good gap-closers for our melee characters. These spells will either warp you to the front or back of your target depending on the spell, and it can be designed to stun or deal flat damage as well! This means our melee players will be able to close that gap and get in a few good hits without being at a total loss against ranged players.

~Quest Improvements~
With a little genius programming we can now have Quests have a task to talk to specific events! This means we can actually have moving and intricate storylines with our quests now!

Anywho, that’s it for now, guys! Until the next Dev Log - Sky

~Armistin~
The Desert dwelling of Armistin, home to the Ember Knights, is being worked on extensively. This is the second settlement in Life Forge, and as such, it’s gonna be very important.

And for those of you who wanted to know, this is what an Ember Knight looks like:

Life Forge is now the most successful game that has come from Eclipse or any of its previous siblings. Green lit in 16 days, 100 people on since release with loads more sat waiting to play (upping the cap soon). Glad to be apart of this project and would love to invite anyone to come and check us out!

I dunno about your claim; crystalshire was really popular when it first launched.

Halloween Event is now LIVE! Double Experience for the rest of today and Event lasts for the entire week! Grab your Ghost busting equipment and get your free Cosmetics!

Here is a couple of the new maps (too many to post).

BeNjO
This post is deleted!
Reply Quote
last edited by
1

In light of the changes that have been made within the past year, the Life Forge team is happy to announce that we’ve completed our checklist. Now that we’ve caught up with all previous roadmap / announced ideas, We’ve opened up a new realm of possibilities for Life Forge!
With that said, we’d love to invite you all to view our roadmap for the following month.

1: PVP Volcanic island with various high end resources allowing players to literally fight there way to the top!
2: Flushed out content from the beginning of the game. We’re looking to further the experience at the beginning of the game, seeing as we’ve mainly focused on end game content. Expect flushed out contnet in area’s between the levels of 1-30.
3: More raids and dungeons are coming! Look forward to delving into the depths of the sea, as well as the innards of a active Volcano!
4: Quests Galore! Expect a huge increase in quests, including a massive quest line that will bring the world of Life Forge together!
5: ?
The following patch notes below are the results of a hard years work on life forge up until now.

Classes:
DPS classes now have different Damage bonuses depending on the classes (minor between them), Tanks now have Defense Bonuses and Hybrids get a little of both.

Notes:
*Auction Items now require you to interact with an Collection Chest inside any auction house to collect your item(s) or Gold. This is to increase performance and login times.
**‘Shared Loot’ allows any Character to pick the Loot up instantly. This removes the 30 second “Last Kill is Owner” protection.
We’d like to thank everyone for coming on this journey with us! In the months and years to come, we hope to bring Life Forge up to the potential it deserves!

We hope to see you in-game!
Life Forge Team

ollixsykes
This post is deleted!
Reply Quote
last edited by
0

I was going to do another combination of Patch Notes like above, but honestly I don’t think the forum would allow me to post it as it would be massive! I would like to post a link to our News section where you can find all the changes since my last post.

Some of the newer Steam Store images: 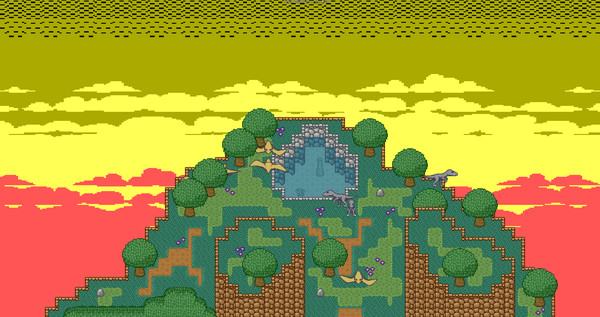 I’ll finalise my post with a quick Q&A of my most asked questions:

Why VB6?
Why not? The only downfall to VB6 is the single thread. Everything else is exactly the same as any other language albeit an older and finicky. We chose Eclipse because it’s what we had and Unity and the likes were not free at the time Life Forge was born, and buying licenses for an team of ~5 for a “for fun” project was not something we could do.

I heard eclipse can only support X amount of players, is this true?
Unless you re-write a good chunk, it’s true. Life Forge can handle around 200 players per server with our network compression and newer core systems. You will need to rewrite core parts of the server to be viable else you start to bog down. Example; work out your average CPS idle, with 1 account logged in, login with 20 clients and take notes, then log out of all but the last account that logged in (index 20). And remove any Events for ever.